With the new national hunt season underway, it’s time to take the long view on the upcoming Cheltenham Festival 2019. The festival which is scheduled to take place on March 12th – 15th, is anticipated to be the best yet with many wondering of Irish trainers Willie Mullins and Gordon Elliott can continue their dominance. There is plenty of speculation as to which horses will run but we’ve picked a few that we think can do well. The actual race declarations will not be made until much closer to the event but keep these runners in mind.

The five year old from trainer Amy Murphy has had a remarkable year. From November 2017 to March 2018 his rating shot up from 138 to 153 and his performances in between were incredibly impressive. A win at Wetherby started off his season in fine form and that was followed up by another win at Doncaster. By January 2018 he was ready to go again at Sandown where he finished second to Summerville Boy. But just a few weeks later he was back to his winning ways at Newbury, taking home £88K in the Betfair Hurdle.

With such a successful season behind him, he headed to the Cheltenham Festival for the Supreme Novices’ Hurdle but was just pipped to the post by Summerville Boy – again.

Undoubtedly he will be back at Cheltenham Festival 2019 and so Paddy Power is currently offering ante-post odds of 8/1 on him to win ANY race. That’s a decent bet given his form and the fact that no decision has been made as to which race he will ultimately run in.

This is more difficult proposition to consider for the ante-post bet. Owners at Gigginstown House have yet to decide if Samcro will stay over hurdles this season if they will send him chasing. That alone opens up a number of potential races for the six-year-old. Trained by Gordon Elliott, Samcro had a terrific season last year and took the Ballymore Novices’ Hurdle at Cheltenham in fine style, making it four wins on the bounce for connections. All were with jockey Jack Kennedy on board.

Speaking to the Racing Post, Eddie O’Leary said: “We haven’t decided what Samcro will do yet and at the moment I would say it is 50-50,” said O’Leary when asked what the most exciting young horse in training would be doing this season.

He added: “He went back into training with Gordon a few weeks ago, but it is still very early days so nothing has been set in stone.

“The Champion Hurdle at Punchestown was supposed to tell us where we were going. If he’d won that he was staying over hurdles and, if he was beaten, we were going chasing. He fell before we knew what would have happened, so it didn’t decide anything.”

Bookmakers have hedged their bets and offered ante-post odds on multiple races with Samcro 5/1 second favourite behind Buveur D’Air for the 2019 Champion Hurdle with Paddy Power. You can get him as big as 8/1 with BoyleSports for that race. He is outright favourite for the JLT Novices’ Chase and the RSA.

If you think he can win but unsure where to put your bet, consider the 6/4 odds with Paddy Power for Samcro to win ANY Cheltenham Festival 2019 race.

Native river finished last season with the jewel in the crown – the Cheltenham Gold Cup. For connections, and in particular, trainer Colin Tizzard, this was a spectacular achievement that had been in the making for a long time.

Owners, Brocade Racing said: “Winning the Gold Cup was a little bit surreal, it was a dream come true and it takes some sinking in.

“Even now when we watch the DVD we suddenly think, ‘This is the Gold Cup’. We have achieved our goals and if we could win it again it would be amazing.”

And so that is the plan for this season – to win the Gold Cup again. In fact the plans are even more ambitious as the team prepare to target the million-pound bonus that has been offered by Jockey Club Racecourses for the last three seasons. If a horse can win the Betfair Chase at Haydock on November 24, the King George at Kempton on Boxing Day and the Gold Cup at Cheltenham in March they win the money.

Plans are to start Native River at Haydock with Joe Tizzard saying: “We will likely start him at Haydock for the Betfair Chase, and if he won that then we would be tempted to go for the million-pound bonus.

“We’d then have to think about going to Aintree or Punchestown.

“If you win at Haydock then it certainly has to come into the equation, there’s a lot of time between the races so it is very doable – it’s not easy though.

“We’ll have to play it by ear but I would imagine he’ll start back in the Betfair Chase.”

Winning back-to-back Gold Cups in incredibly difficult and as such ante-post odds are just 7/1 with Paddy Power on Native River to retain his title in 2019. 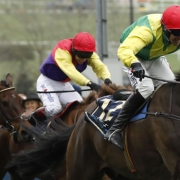