Over the course of Royal Ascot week, one jockey stole the show and that was Frankie Dettori. The Italian ended the week with seven winners to take the title. Jockey Ryan Moore managed just five in second. It was expected that Moore would win the title, but Dettori had other ideas, showing that he was still at his best despite his advancing years.

The 48-year-old is edging towards retirement although he looks fit and good enough to keep going for another decade. He will eventually call time on his career. But he loves racing and has cut down the number of rides to keep going for a little longer. With the quality we have seen from him this week, retirement doesn’t seem to be on the cards anytime soon.

The remarkable part of Dettori’s seven winners is that he drew a blank on both the opening and final days of the meeting. However, during the middle three, especially on Thursday, he was at his brilliant best.

Wow, what an amazing week pic.twitter.com/SWVZYgq7OF

The week was highlighted by a four-timer on Thursday afternoon in the first four races on the card. It was one that sent the bookmakers running for cover on the final two days of the meeting. Many were reporting the potential loss of millions. Others took the extreme steps to not accept Frankie Dettori multiples on Friday or Saturday.

Dettori wasn’t able to complete the magical six-timer in the final two races on Thursday’s card. But what he did do on that day was throw himself back into the limelight. It wasn’t just with racing fans but with sports fans all over the world. His four-timer was spoken about on the news bulletins, giving a positive story to promote our sport.

Ryan Moore, who finished behind Dettori on five winners, will probably be disappointed with his haul for the week. His trainer Aidan O’Brien won his 10th top trainer title at the meeting, with five winners. That was one more than his total in 2018. However, Moore was not on board all of them and considering the rides he had over the week, from both O’Brien and Sir Michael Stoute, he will be disappointed to come away with only five wins.

It is Dettori, not Moore, that we are all talking about though and the Italian is in the place he loves the best, right at the heart of all the attention. He may be 48 years old, but there are no signs to show he is slowing down and based on Royal Ascot week I don’t think retirement will be on the cards for him any time soon. 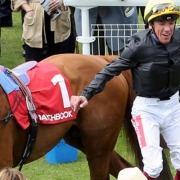 Super Stayer Stradivarius Wins Back to Back Ascot Gold Cups

Super Stayer Stradivarius Wins Back to Back Ascot Gold Cups