Mick Channon trained Glen Forsa looks set for a step up in class at the Cheltenham Festival when he heads to the Arkle Chase. The horse was originally penned down for the Close Brothers Handicap Chase, which is of a lower standard, but the way he demolished a field, including Kalashnikov, recently at Sandown was enough to book his place in the Grade One Arkle Chase.

Kalashnikov and Le Richebourg down

Prior to that race, the Arkle betting market was focused on Kalashnikov and the Irish trained runner Le Richebourg. However, on the day, Kalashnikov was a big disappointment and looked as though he lacked the speed for two miles. Since then we have heard the bad news that Le Richebourg has been ruled out for the season with an injury.

Just under one-third of bets on the Arkle since Boxing Day have been placed on Le Richebourg and his absence will be a big blow to ante-post punters who have gone in with him. He won his last two starts in very impressive fashion and looked to be a deserving favourite for the race and live contenders for trainer Joseph O’Brien.

The news about Le Richebourg missing the race has prompted punters to latch onto Defi Du Seuil, who is trained by Phillip Hobbs but owned by JP McManus, the same man who owns Le Richebourg. McManus will want a representative in the Arkle and it looks as though he may switch Defi Du Seuil to the race from the JLT Chase.

He has shown some very good form over two and a half miles recently, winning a Grade One on his last start. If he is to run well in the Arkle Chase, he will need the race to be a strong test of stamina, rather than a sprint finish. He is a previous Triumph Hurdle winner, giving him the vital festival form that typically inspires punters, even if it is over different distances and codes.

The absence of Le Richebourg and the question marks surrounding Kalashnikov have really changed the betting market for the race. Kayley Woollacott trained Lalor is the favourite for the race despite not being seen on a racecourse since finishing third at the start of December.

However, it is the run prior to that which punters are remembering and the main reason they are backing him right now. He won at Cheltenham over two miles, putting a good field to bed with ease and showing that he loves the track, which is a big positive for him.

GLEN FORSA is the winner of the fourth race, The Viasat Steeplechase for Mick Channon and @JohnnyBurke2 ???? pic.twitter.com/z9jEgAt2lU

From Strength to Strength for Glen Forsa

However, those looking to back a horse with more recent form in the book will be drawn towards the rapidly improving Glen Forsa from the Mick Channon yard. He was initially thought of as an ideal horse for the Close Brothers Handicap Chase, a race that was won by the same owners and trainer of Glen Forsa last season with Mister Whitaker. Just like this horse, Mister Whitaker was very progressive last season, and it looked as though Channon had the same plan and was aiming at the same race this season with Glen Forsa.

Things changed in the middle of February, though: he came to life more than we ever expected to see when he ran at Sandown against Kalashnikov and, because of that run, Channon has been forced to switch targets. Glen Forsa will now be rated too highly to run in the Close Brothers Handicap Chase and after impressing so much over two miles, the drop back in trip puts him forward for the Arkle Chase. The winning distance that day was 19 lengths, with Glen Forsa eased down towards the end of the race once it was put to bed.

If there is one real positive for this horse then it is his ability to jump at speed and he puts his rivals in trouble because of that. When he raced against Kalashnikov and beat him, that is exactly how he did it: he jumped beautifully, causing problems for the Amy Murphy trained novice throughout the race. When you add that to his cruising speed, he becomes a very dangerous horse.

This Runner Has The Staying Power To Go Far

Cheltenham is known for being a tough jumping track and if you make mistakes at the very top level you will be punished. It would be no surprise to see normally good jumpers suffer at the hands of Glen Forsa, pressured into making mistakes, such is his ability to attack fences from the front.

The hill finish at Cheltenham should suit him and play to his strengths. When others, who may not quite stay the trip strongly, fade away as they hit the hill, Glen Forsa should have the power to hold out and secure himself and Mick Channon a win. He is likely to run from the front and really make the race a good test. The expectation is that he will sort out any horses lacking that same stamina.

The one-third who have missed out through Le Richebourg’s exit may look to Glen Forsa as a decent alternative. Indeed, with horses falling away from the Arkle Chase and Glen Forsa improving at a rapid rate, Mick Channon will really fancy his chances of landing the Grade One race at the festival. 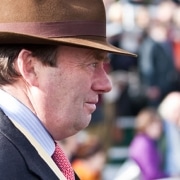