At 11 years old, this year is probably the last chance saloon as far as a big staying race goes for Carole’s Destrier. He won nicely at Newbury to round off 2018. And another win in early 2019 could be enough to see him step up to over four miles. That puts him a in solid position for either Cheltenham or the Grand National.

He has previously won over three miles and five furlongs. He hasn’t tackled anything over 4m but he has finished his races very well.

In November 2016, he finished just behind Native River in the Hennessy Gold Cup. On the back of that, at the start of 2017, he was rated 154. Even after his win at Newbury last weekend, he is still only rated 138. This is a good indicator as to how well handicapped he could be.

That said, he would need another win to secure a starting place, but even with that additional weight, things would still look pretty favourable. That’s based on his old rating and the horses he has run behind in the past.

One thing he will have to contend with for the first time, is the Aintree national fences. He has run at the course before, but never over the big fences. But as a seasoned jumper they shouldn’t pose too many problems.

The other question mark is staying ability. Can the horse stay the distance of over four miles? The Welsh National distance of 3m5f is the furthest we have seen him over in the past. And while he didn’t win in that race, he didn’t show any signs of not staying. He has run three times over a distance of three miles and five furlongs, winning once and that points well to him staying the trip.

As far as National or Cheltenham contenders go, Carole’s Destrier is not the most obvious choice. He will need to win again before the weights are revealed to get into the race. He is entered at Catterick on January 10th. That race is over 3m6f so clearly trainer Neil Mulholland has his eye on Aintree.

He doesn’t tick boxes as far as the trip and fences go, but there is a lot to like about this horse. If he is on a going day then there is every chance that he can run a good race in the big one. The one thing he doesn’t have on his side is time, and this is likely to be the last chance he gets to run in a top quality handicap, so the yard will be hoping he makes the race. 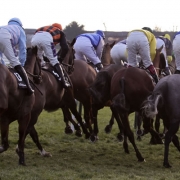