The 2019 renewal of the Ascot Gold Cup shaped up to be better than the 2018 event, which Stradivarius won. That led to questions being asked about his ability and whether he could defend his crown. Questions that he answered in emphatic style at the Royal meeting on Thursday with a second win in the race.

This was all part of a magical day for jockey Frankie Dettori. He rode four winners on the six-race card, with Stradivarius rounding it all off for him. However, as much Dettori took the headlines, he was quick to praise Stradivarius. He described him as a superstar and one of the best horses he has ever ridden. When you think about the horses that Dettori has been associated with in the past, that is certainly high praise.

Prior to Ascot last year, there was a question mark as to whether Stradivarius would stay the trip. But that wasn’t there this week. Instead, it was a question mark over many of his rivals. And there is no doubt that he stayed the distance better than they did, coming home strongly after being trapped in a pocket a little. Dettori knew what he had left and didn’t panic. It was a sign of his experience on the big stage, before delivering the horse down the outside to come away from the field.

When winning at York over 1m6f to kick start his season, Stradivarius looked as though he had grown and matured further. He needed every inch of that trip to get home in front, showing the staying power he now has. Two miles or further is exactly what he needs. And now just two races stand between him and lifting the £1 million stayers bonus once again.

Next up is a trip to Goodwood for the Goodwood Cup, the third leg of the bonus. That comes just before a final race back at York where it all started for this horse in the Lonsdale Cup. That is held at the Ebor meeting towards the end of August. Those two races are now firmly in the sights of Stradivarius, John Gosden, and Frankie Dettori as they look to complete the challenge for a second consecutive year.

Based on what we have seen so far, the next two races are going to suit this horse down to the ground. And it is going to take a huge upset to see him beaten in either one. He didn’t get the run of things at Royal Ascot, but still came out on top. With similar challengers taking him on again, can any turn their form around and beat him?

That looks unlikely. In 10 years time, we could be looking back at this time and saying we were all lucky enough to see one of the greatest stayers in training win back to back £1 million stayers bonus championships. 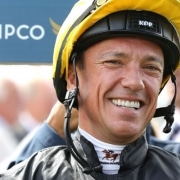