Knowing which particular Cheltenham race to aim your horses at can be a difficult decision. It’s made even trickier when there are a number of reasonably similar races to choose from. It’s also why so many horses have multiple entries with little or no confirmation as to which they will actually participate in, until what seems like the last minute.

So many potential runners fall into that category in 2020. For example, Samcro from trainer Gordon Elliott has FIVE different Cheltenham entries. A mixture of both chases and hurdles over distances ranging from 2m to 3m 1/2f, it would appear that all options are still on the table.

But one trainer who has solidified his plans is Henry De Bromhead. Trainer of Honeysuckle, he has now announced that they will be targeting the David Nicholson Mare’s Hurdle instead of the Champion Hurdle. Both are scheduled to run on the opening day of the Festival.

For those wondering what the differences between the two races are, let me explain. Both are Grade 1 races but the Champion Hurdle is slightly shorter by around 4f (800m). There are also more hurdles to be jumped in the Mare’s Hurdle, 10 in total against the 8 in the Champion.

And of course, there is the obvious difference. The Mare’s Hurdle is only open to Mare’s whereas the Champion Hurdle is open to both.

Weight-wise, these are not handicapped races so all runners in the Champion Hurdle run off 11-10. The exception is that Mares in the race do have a 7lb allowance so run off 11-03. In the Mare’s Hurdle all runners carry 11-05.

When it comes to the prize money however, things are very different. The winner of the Champion Hurdle takes home £253K from the £450K prize fund. Not so lucrative is the Mare’s Hurdle prize fund of £125K from which the winner takes £67,500.

The biggest competition for Honeysuckle will be Benie Des Dieux, if she runs in the race. While officially that is her only Cheltenham entry, her owner Rich Ricci has mooted the idea of supplementing her for the Champion Hurdle so odds are available for both races.

Benie Des Dieux has gone off as the odds-on favourite in the Mares for the last two years. She won it in 2018 but completely blundered the last hurdle in 2019, under Ruby Walsh, and crashed out of the race. That left the door open for Roksana to take the win, followed closely by Stormy Ireland.

Incidentally, both Roksana and Stormy Ireland have entered again this year. That said, few horses have the class of either Benie Des Dieux or the unbeaten Honeysuckle. Maybe Stormy Ireland or Lady Buttons can give them a run for their money, but it will be close on the day.

If Benie Des Dieux opts for the Champion HUrdle then my money would be on Honeysuckle for the Mares Hurdle.

Few horses ever manage to retain an unbeaten run. Even Benie Des Dieux fell last year and Altior was beaten at Ascot in November ending his phenomenal run. But Honeysuckle is on seven wins from seven races and won the Irish Champion Hurdle last time out at Leopardstown in February. That was her biggest win to date but also her most difficult as she only just managed to get across the line 1/2L in from of Darver Star.

Always ridden by Rachael Blackmore, this is an incredible pairing and could easily get De Bromhead’s festival off to a great start. Speaking about the decision to go in the Mare’s Hurdle he said: “Honeysuckle was so impressive over two and a half miles and it’s the mares’ championship race. We think that’s the race to be in.

“We gave it a lot of thought and discussed it, and that’s what we’ve all decided. I’d imagine we’ll confirm her for the Champion at the five-day stage because we’ve come this far and we may as well leave her in and keep the option open. But we’ve called it now and the mares’ race is the plan.

“There are various things to take into account, but mainly it’s that her most impressive performances have been over two and a half miles.

“That’s the trip she’s got her highest rating at. She still won an Irish Champion Hurdle but we just feel that it’s the mares’ championship race so that’s the race to go for.”

Honeysuckle would have a lot of competition in the Champion Hurdle so odds for that are 4/1. Her chances improve significantly for the Mare’s so of course, odds are shorter. Paddy Power has her on 13/8 behind odds-on Benie Des Dieux.

For those looking for a little bit more value, Stormy Ireland is 6/1 with last year’s winner Roksana on 8/1. Apples Jade isn’t far behind on 10/1 with Lady Buttons on 12/1. 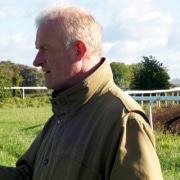