Despite nothing being entirely predictable when it comes to horse racing, especially the big festivals, the betting markets would have you believe that the 2021 Stayers Hurdle is already a two-horse race.

Months in advance the ante-post odds clearly favour Thyme Hill and Paisley Park over all other runners.

But have the bookies got it right or are punters being led down the wrong road when it comes to picking a potential winner?

First off let’s look at why these two horses are dominating the 2021 Stayers Hurdle markets.

Trained by Philip Hobbs, Thyme Hill is the six-year-old bay gelding, out of Rosita Bay and sired by the legendary Kayf Tara. As pedigree goes, this is right up there.

Kayf Tara has also sired the likes of Thistlecrack, Tea For Two, Carruthers, and Blaklion so as winners go, this is a pretty good start.

But the proof is in the racing pudding and much like the great super 7 slot, Thyme Hill has already notched up four wins from five hurdle starts.

The first of those was at Chepstow in October 2019 when he took a Grade 2 novices hurdle. One month later and he was off to Cheltenham to win the Ballymore Novices Hurdle in November 2019.

The wins kept coming and in December 2019 Thyme Hill won his first Grade 1 at Newbury. With three back-to-back wins, he went to the 2020 Cheltenham Festival as favourite to win the Albert Bartlett, going off on odds of 4/1.

However, he was beaten into fourth place by the narrowest of margins and couldn’t claim another coveted victory.

With racing then postponed for the next few months, it wasn’t until a few weeks ago that Thyme Hill had the opportunity to head back the course and stretch his legs.

Once again he was partnered with Richard Johnson who steered him to victory in the Ladbrokes Long Distance Hurdle at Newbury. And he did it by beating Paisley Park.

Two years older and with quite a few more runs under his belt, Paisley Park looks like the biggest threat to Thyme Hill in the 2021 Stayers Hurdle.

Trained by Emma Lavelle, Paisley park has had 13 trips over hurdles, winning eight of them and placing second in three more. That is quite a racing record and one that has earned connections over £430K.

Unlike Thyme Hill, Paisley Park has run in two Stayers Hurdles, winning the race in 2019. That was enough to send him off as the race favourite for the 2020 renewal but he inexplicably underperformed and ended up in a disappointing seventh place.

Getting a little bit of his groove back he then headed to Newbury where he was beaten by just over a length by Thyme Hill.

The Rest Of The Field

Glancing through the rest of the 2021 Stayers Hurdle betting market it’s easy to see why these two are the top contenders.

So many of the other ante-post runners may not even run in the Stayers. The likes of Roksana, Benie Des Dieux and Honeysuckle will more than likely go to the Mare’s Hurdle – though that’s not guaranteed as the Mare’s Chase is also an option.

Champ is in contention but has one eye on the Gold Cup and quite a few of the rest of the market have already run in the Stayers and made little impact. Interestingly, despite winning the race in 2020, Lisnagar Oscar is 50/1 again so that could be a canny each-way bet!

Past Winners And Their Odds

While the Rebecca Curtis trained Lisnagar Oscar romped home as the 50/1 outsider in 2020, big priced winners are very rare in this race. The next highest price was Cole Harden at 14/1 in 2015.

At the moment there are only five possible runners in the betting market on odds lower than that. Of course, that will all change as the entries are announced and the declarations are made much closer to the race.

So for now, we are left guessing as to which Stayers Hurdle runners will make it to the starting tape. If all goes well over the rest of the season we should see a few more contenders come into the picture because surely, it isn’t going to be a two-horse race – is it? 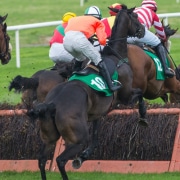 Who Will Win The 2021 Stayers Hurdle?

Bryony Frost And Frodon Do It Again
Scroll to top