The Cheltenham Gold Cup is the blue riband event of the Festival and is run over an extended three-and-a-quarter miles.

The race is open to horses aged five and older and it really puts the emphasis on a horses’ ability to jump fluently, to have excellent tactical speed and then calls upon the horse to have stamina in abundance in order to make their way up the incline in a race to the finish.

Horses that make mistakes are found out very quickly in this feature event and even the brave warriors who have won in the past have found it difficult to recapture their best form afterwards.

It is a gruelling contest often run at excessive speed so it can pay to side with those who have previous knowledge of the course and distance when making a selection.

If you like statistics, it usually pays to stick with horses aged between seven and nine years of age as they have won nine of the last ten renewals.

Long Run is the only recent winner to have been aged as young as six and the last ten-year-old to win this Cool Dawn in 1998.

It is quite a good race for well-fancied runners. Four of the last ten favourites have obliged and four other winners have been within the first three in the betting market on the day.

Paul Nicholls has won the race three times in the last twenty years and Nicky Henderson and Willie Mullins have won two apiece in the same time-frame.

Below are selected runners who hold entries for Cheltenham Wellchild Gold Cup 2021.

A winner in each of the last two years, he bids to become just the fifth horse in history to win a third successive Gold Cup.

He took his usual route to coming here by winning at Tramore and won as he liked that day in a fairly uncompetitive renewal of the Savills New Year Day Chase.

He comes here race fit though and knows exactly how to jump these fences. A deserved favourite but vulnerable to a younger improving sort.

Champ won the RSA last year in dramatic circumstances and has had a less than ideal prep for this.

Nicky Henderson struggled to find races to get him in due to the combination of wind surgery and race abandonments, so plumped for the game Spirit Chase at Newbury last month.

That was over far too short a trip and he acquitted himself well when finding only Sceau Royal too good.

He now comes here fit but the form of the RSA has taken a few knocks. Other horses come into this far better prepared and he has to be taken on.

A Plus Tard – Henry De Bromhead

A Plus Tard won the Novices’ Handicap Chase here at the Festival a couple of seasons ago and bounced back to somewhere near his best when getting the better of Kemboy in the Savills Chase at Leopardstown just after Christmas.

That form has been franked subsequently by the runner up and this young pretender could prove to be a major thorn in the side of Al Boum Photo.

We know he gets up this hill and if putting in a clear round under Rachael Blackmore, they could make history in what has been a dire year all around.

Frodon deserves a little more respect than what many have offered in the run up to this. It is no mean feat to win a King George, but he could hardly have been any more impressive.

He absolutely loves Cheltenham and surging up this hill. He comes here in the form of his life and the former Ryanair winner could surprise a few.

Royal Pagaille comes here in search of a four timer having won the Peter Marsh Chase with the minimum of fuss.

He has revelled in the mud this year and has certainly improved from being the timid six-year-old that we witnessed last season.

It could be that he just took time to adjust to life in England having moved from France where he was trained by Francois Nicolle.

If the ground were to stay on the soft side, he would certainly have claims.

The further they went that last day, the better he looked but drying ground is a major concern and he will need a career best effort.

Kemboy comes here in the form of his life but in two previous runs here he has shown complete disdain for the track.

He has had easier opportunities than this to win this prize and it will take a monumental effort from Danny Mullins to get him home in front.

He’s unlikely to get an uncontested lead with Native River in the field and may just sulk.

The former Gold Cup winner once again graced the winners’ enclosure at Sandown in the Cotswold Chase last time out.

He jumped twenty-two fences in convincing style to show that he retains plenty of his ability.

He fully deserves another crack at this prize but it would be a massive surprise if at the age of eleven that he could win it again.

There are younger and more progressive sorts in the race but he has solid each-way credentials.

Minella Indo is still relatively unexposed over fences and is a previous winner of the Albert Bartlett.

He made a pleasing first two runs of the year when winning at Wexford and Navan unchallenged.

A fall in the Savills Chase behind stablemate A Plus Tard really dented his confidence though and he struggled behind Kemboy in the Irish Gold Cup at the Dublin Racing Festival.

He will need to put those two recent efforts very much to the back of his mind, but he is not a bet for me in this.

Santini has had easier opportunities to win this race and whilst he has run very well in this race in the past, he just gives the impression that time has passed him by.

His form this season looks nowhere near as strong as any of the main protagonists and whilst he will appreciate the better ground and a return to this track, he is one to avoid. 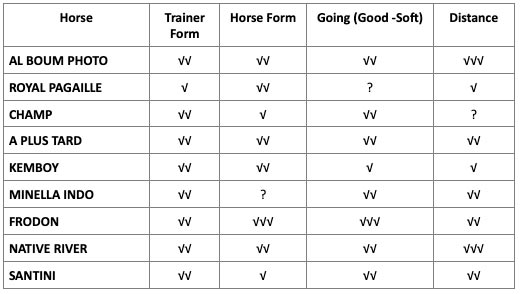 A Plus Tard’s form has been well advertised by Kemboy coming out to win the Irish Gold Cup and he just gives the impression that he will relish a battle of this type and is a previous winner here at the Festival.

Rachael Blackmore could well be the very first woman to ride a Gold Cup winner to make history on what would be a momentous occasion.

Al Boum Photo will likely give him most to think about, but either way this will be a fantastic race and a mouth-watering clash awaits.

Tips For The Albert Bartlett Novices’ Hurdle 2021
Scroll to top