The Supreme Novices Hurdle may not be the most lucrative race at the Cheltenham Festival but it is one of the most important. If you’re saddling up one of the favourites and you win then it bodes well for the rest of the event. However, if your horse underperforms it can cast a show over the rest of your entries.

The Grade 1 national hunt hurdle race is run on the Old Course at Cheltenham over a distance of about 2 miles and ½ furlong. As it is a novice race, the horses running have not won a hurdle race before the start of the current season. But since then most in this year’s race have had a least three spins over hurdles, though there are a few that fall on either side of that.

In terms of the race favourites for 2021, it should come as no surprise that Willie Mullins leads the way with Appreciate It. Already holding the record for most wins by a trainer, with six, this is a race that Mullins has dominated in recent years. From his first win in 1995 with Tourist Attraction, it was 12 years before he notched up a second win with Ebaziyan in 2007.

The only problem with definitely suggesting that Mullins has this in the bag is the fact that the entries have not yet been whittled down. There are currently 46 horses still in contention but the race has a maximum of 22 runners. So without knowing exactly which runners Appreciate It will be up against it’s tricky to make the call.

To make the situation even trickier is the fact that Appreciate It is entered into two races and is a favourite for both with the bookmakers. There is the Supreme Novices Hurdle on Tuesday and the Ballymore Novices’ Hurdle on Wednesday. But on the basis that he will run in the Supreme can he win it?

Metier will enjoy a racecourse gallop this week alongside a small but talented team that heads to the Cheltenham Festival in two weeks.

Find out all my thoughts on the team’s intended engagements in our March newsletter.

Unbeaten this season, his wins include two Grade 1s at Leopardstown, the first by a considerable nine lengths. But the competition will be tougher at Cheltenham with his main rival being Metier from trainer Harry Fry.

Appreciate It may have more substance to his form but Metier has also got the speed and won last time out by 12L. He’s in great form and really pleasing trained who said in his blog: “He will have a racecourse gallop this week, which should put him spot-on for the Skybet Supreme Novices’ Hurdle.

“He has been working very well at home, and we couldn’t be more pleased with him.

“As horses go, he is fairly uncomplicated. He has a good turn of foot and, to date, has proved a very solid jumper; the only concern would be if the ground dried out too much.”

The Rest Of The Field

The Supreme Novices doesn’t always go to plan. Last year’s race favourite, Asterion Forlonge finished in fourth place. It was the 6/1 Shishkin from Nicky Henderson that surprised everybody. Will that happen again in 2021?

I like the look of Soaring Glory from trainer Jonjo O’Neill. He may not have the Grade 1 wins of his rivals but his win in the Betfair Hurdle in February showed a lot of class. It was a large field of 23 runners, far more than any of the races Appreciate it or Metier have run in.

It was lovely to receive our Betfair Hurdle trophies today.

I think Soaring Glory had just spotted his name on them!

It was also a much fast winning time than either of the other two have clocked this season. That pushed his OR up to 143, just five behind Metier. The only downside is that he has never run off 11-07 so that will be an unknown.

However, with Paddy Power offering odds of 8/1 he is better value and could a consideration for an each-way bet.

Bob Olinger from Henry De Bromhead is another interesting contender. He has been storming through this season winning two of his three starts. They weren’t all Grade 1 standard but he absolutely barrelled through them under jockey Rachael Blackmore.

His races were longer and he won by greater margins under very weights propelling his OR to 150. So you could draw the conclusion that a slightly shorter race, carry less weight would only be a good thing. The downside is that the ground will need to be at least soft but at odds of 12/1 he’s definitely worth a look. Though at this stage he looks more likely to go in the Ballymore Novices Hurdle where his odds are shorter at 7/2.

One thing is for sure, Willie Mullins doesn’t have the Supreme Novices sewn up just yet! 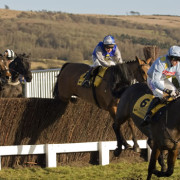 Can Anyone Stop Shishkin Winning The Arkle Chase?
Scroll to top