This race was formerly known as the RSA Chase and has been used as a stepping stone to Gold Cup glory in subsequent years by the likes of Denman, Bobs Worth and Lord Windermere.

It is run on the old course over a distance of just over three miles. There are twenty fences to be jumped and it usually takes in and around six minutes to complete.

The winning most trainer in the race is Nicky Henderson with four who is closely followed by Willie Mullins and Paul Nicholls with three apiece.

Horses that are sired by either Oscar or Presenting have won the race four times between them.

The biggest priced winner of this races over the last decade was Bostons Angel in 2011 who won at 16/1.

The winner is usually well found in the market with each of the last four winners being no bigger than 4/1 in the betting.

With the exception of Don Poli in the last decade, all other winners have been aged seven or eight.

Gordon Elliott has never won this race so his horses should be avoided here. 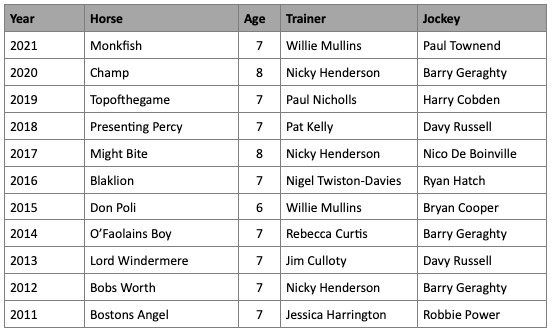 Below are selected runners who hold entries for the Brown Advisory Novices’ Chase 2022.

Bravemansgame is unbeaten in four starts this term for Paul Nicholls as he seeks to extend that run here.

His prize haul this season has included the Grade 1 Kauto Star Novices’ Chase at Kempton where he beat Ahoy Senor, who has come out to frank the form since.

He is rated 1lb higher than Topofthegame was when he won this for the same yard back in 2019 and that horse took the same route but was only second in the Kauto Star during that year.

Ahoy Senor was a talented hurdler last season he got the better of Bravemansgame in the Doom Bar Novices’ Hurdle at Aintree.

His debut over fences was far from spectacular as he unseated Dominic Fox at Carlisle in soft ground.

He more than made up for that with an easy Grade 2 win at Newbury on his following start before Bravemansgame turned the tables on him in the Kauto Star albeit over fences this time.

A win at Wetherby subsequently again in Grade 2 company means he is fully worth his place in the line-up but his lack of track experience here is a major concern.

L’Homme Presse has continued to improve as the season has progressed.

Venetia Williams would appear to have a top notch chaser on her hands as this fella won the Scilly Isles Novices’ Chase by 21 lengths on his most recent start when partnered by Charlie Deutsch.

The style of his ten length win over this course suggested he would have no issue being stepped up in trip and he is still completely unexposed.

Capodanno is very much the Willie Mullins second string here. He was held up in the race that Galopin Des Champs won at Leopardstown just the other week.

He was far from fluent with his jumping and made a complete and utter horlicks when unseating Mark Walsh at the fifth fence.

He was well considered as a threat as he was sent off at 13/2 that day. He needs to improve beyond all recognition to turn the tables on his already proven stable-mate.

Threeunderthrufive has not looked back since finishing second on his seasonal reappearance at Chepstow back in October.

Four consecutive victories have subsequently followed including once over this course and distance in novice company.

He has been campaigned successfully twice in Grade 2 company this year at Doncaster and Warwick, albeit in small fields where he stayed on best of all.

Worth his place in the line-up but unproven at this top level.

Beacon Edge has shown some top class form this season particularly when winning the Grade 1 Drinmore at Fairyhouse last November over two-and-a-half miles.

It is this three mile trip that seems to bring out the best in Noel Meade’s charge and he showed he was still in good form when second to Farouk D’alene in a Grade 2 on testing ground at Navan just last month.

He also brings previous festival form into the race following his highly respectable fourth to Flooring Porter in the Stayers Hurdle last year.

L’HOMME PRESSE is the selection. He is far more appealing than Bravemansgame who didn’t seem to get up the hill last year whereas L’Homme Presse has already won a Grade 2 race around here.

Ahoy Senor is prone to the odd error and that could be costly at this track.

Team GB appear to hold all the aces here with a strong field on their side now that Galopin Des Champs waits until Thursday.

I am not entirely convinced that Bravemansgame will stay on up the hill, whereas his stablemate Threeunderthrufive has conclusively proven that he does.

He looks the viable each way option. 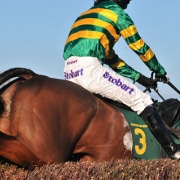 Tips For The Coral Cup Handicap Hurdle 2022 – Can The Favourite Win?
Scroll to top