The Cheltenham Gold Cup is the blue riband event of the Festival and is run over an extended three-and-a-quarter miles.

The race is open to horses aged five and older and it really puts the emphasis on a horses’ ability to jump fluently, to have excellent tactical speed and then calls upon the horse to have stamina in abundance in order to make their way up the incline in a race to the finish.

Horses that make mistakes are found out very quickly in this feature event and even the brave warriors who have won in the past have found it difficult to recapture their best form afterwards.

It is a gruelling contest often run at excessive speed so it can pay to side with those who have previous knowledge of the course and distance when making a selection.

If you like statistics, it usually pays to stick with horses aged between seven and nine years of age as they have won nine of the last ten renewals.

Long Run is the only recent winner to have been aged as young as six and the last ten-year-old to win this Cool Dawn in 1998.

It is quite a good race for well-fancied runners. Four of the last ten favourites have obliged and four other winners have been within the first three in the betting market on the day.

Paul Nicholls has won the race three times in the last twenty years and Nicky Henderson and Willie Mullins have won two apiece in the same time-frame. 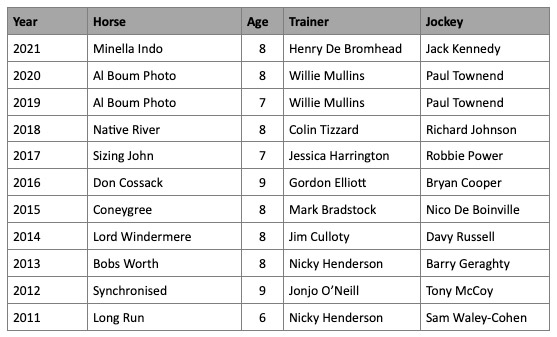 Below are selected runners who hold entries for Boodles Gold Cup 2022.

Galvin absolutely loves it around here and has stamina in abundance having won the National Hunt Novices’ Chase over 3 miles and 6 furlongs when partnered by Jack Kennedy at this meeting last year.

His form at Cheltenham reads 1121 and a short head win over A Plus Tard in the Savills Chase on Boxing Day will give connections solid hope that they can confirm the form here.

Al Boum Photo and Willie Mullins have won the annual prep race for this at Tramore for the last three years.

The level of opposition he has faced on each occasion has been questionable each time, but it did work out for them in 2019 when they won this.

He attempts to become the oldest horse to win this race and whilst there is no doubting his class or his ability the stats speak for themselves.

Ten-year-olds just don’t win this race and he has minor each-way claims at best.

A PLUS TARD – HENRY DE BROMHEAD

A Plus Tard is extremely lightly campaigned this year and lost absolutely nothing in defeat when just touched off by Galvin at Leopardstown in the Savills Chase on Boxing Day.

Clearly goes well fresh and recent form is top class including when runner up to Minella Indo last year.

Bred by Cheveley Park Stud and trained by Henry De Bromhead, he is entitled to go very close again this year.

Co-owned by Sir Alex Ferguson, Protektorat will be donning the familiar red silks as he bids for his first Cheltenham Gold Cup.

Odds have shortened a lot recently, largely due to the amount of rain that has fallen on Prestbury Park this week.

Given that the 7-year-old’s last win was in the Many Clouds Chase at Aintree in December on soft going, punters are latching on to both that and his 25L win ahead of second place Native River.

Ran here in the Paddy Power Gold Cup in November, was beaten by less than a length so has plenty of form and could be in with a chance.

Minella Indo’s first two runs this year were everything short of spectacular and massively disappointing.

Turned over by Frodon at Down Royal and then pulled up behind Tornado Flyer in the King George at Kempton the following month.

A short break seemed to do him the world of good and he at least ran second to Conflated in the Paddy Power Gold Cup at Leopardstown a couple of weeks ago.

It is still a long way off his best though and he needs to improve in order to retain his crown.

Tornado Flyer grabbed his day in the sun when running out a comfortable winner of the King George at Kempton on Boxing Day.

It has been a decade since any horse achieved the King George/Gold Cup double and that will probably be the case again here today.

Time and time again Tornado Flyer has been beaten in multiple Grade 1 races.

He has also been to Cheltenham three times before and never managed better than third place.

Despite a great win at Christmas, he needs a career best performance here.

I can see him running a big race if all is right with him. He certainly enjoyed himself last year when beating Fusil Raffles by three lengths in the Marsh Chase.

Despite pulling up at Kempton in the King George, where he clearly failed to give his true running, he cushioned either side of that performance with wins at Sandown and again over this course and just shy of the Gold Cup distance.

He jumps for fun and whilst everyone is concentrating on the Irish at the head of affairs, he could sneak a bit of E/W value for supporters.

GALVIN looks to have come to the fore just at the right time and he is getting better and better with each run.

His previous form around this track is stunning and whilst this looks sure to be a battle royale between him and A Plus Tard.

His guaranteed stamina should see him outstay the rest of this field.

Of the home contingent, Chantry House looks incredible value at a course he relishes but may find Galvin gets first run on him. 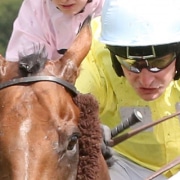 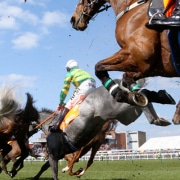 Tips For The Albert Bartlett Novices’ Hurdle 2022 – Trends To Pick A...

Tips For The Open Hunters’ Chase 2022
Scroll to top