The Kim Muir Challenge Cup is open to horses aged five or older. It is run on the New Course over three-and-a-quarter-miles.

There are twenty-one fences to be jumped in the event that closes the action on day three.

It often pays to stick with experienced runners in this race as eleven of the past twelve winners have been aged between seven and nine.

It pays to ignore runners who are carrying less than eleven stone as they have only won once out of the last twelve renewals.

Three quarters of the last twelve winners had all previously run at Cheltenham. 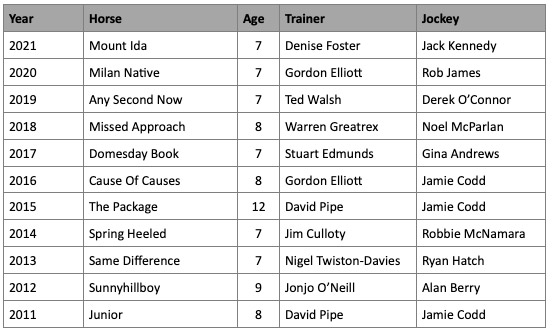 Below are selected runners who hold entries for the Kim Muir Handicap Chase 2022.

He has been switched to fences this season and was a close second in a warm beginners chase at Fairyhouse last time.

He may well shave more to offer at this longer trip and Rob James removes an invaluable three-pounds.

School Boy Hours got off the mark at the tenth attempt over fences when winning the ultra-competitive Paddy Power Chase on his reappearance at Leopardstown in December.

He is versatile ground-wise and has to be respected under top Irish amateur Derek O’Connor on what is his first run since.

A nine-year-old who has been better than ever this season, winning at Fairyhouse in November and then returning to form with third there last month.

The stiff finish is almost certainly in his favour today, as he is partnered by the highly regarded amateur Jamie Codd being in the saddle.

Could well get involved.

Ain’t That A Shame won a heavy-ground maiden hurdle and has improved with each of his three chase starts subsequently, bumping into Galopin Des Champs before going close in a beginners chase at Navan on what was his latest start.

There isn’t much mileage on the clock and he could be anything.

Mister Fogpatches stays longer than the mother-in-law and was third in last season’s Scottish National before winning at the Punchestown festival.

Whilst a little error prone, he’s been admirably consistent in defeat across his last few starts (including over) and this course and distance.

If he can sort his jumping he holds sound each-way claims.

Come On Teddy was third in the Pertemps Final at last season’s Festival and began his chasing career with a win at Uttoxeter back in December.

He made two bad mistakes when runner-up to the re-opposing Omar Maretti at Newcastle last time and needs to avoid those blunders today.

His form reads well with the winner having gone in again since and he has to be of interest.

Glenloe is an evergreen eleven-year-old, who returned this winter from a long absence and needs to raise his game somewhat here.

There have been signs of promise and he’s well handicapped on the best of his old form.

He was runner-up in the Pertemps Hurdle Final here in 2018 but he needs to roll back the years today.

Mister Coffey is unraced beyond an extended two-and a-half-miles but stayed on well in a hot handicap hurdle at Aintree last April.

He did likewise when going close over fences at Kempton back in December, where he jumped to the left.

This step up in trip, allied with the return to a left-handed track, could prompt some improvement and Sam Waley-Cohen is a good booking for this type of race.

Omar Maretti has recorded four wins from five starts having won over fences the last twice and doing so in good style from Almazhar Garde at Catterick last month.

A five-pound rise could prove lenient for this unexposed sort.

There could be more to come from him. 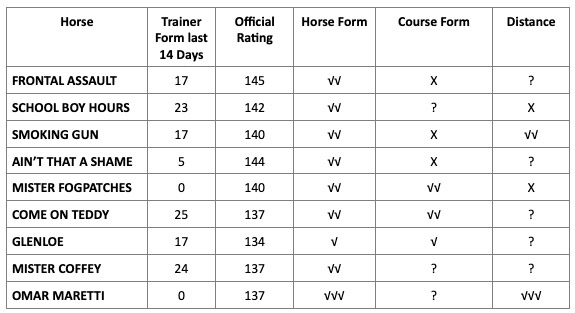 COME ON TEDDY has some decent form around here and can do his small yard justice as he is their only representative at the meeting this year.

Will Biddick is a notable jockey booking for the stable and no surprise if he turns around recent form with Omar Moretti.