The curtain comes down on this years’ festival with a competitive two-and-a-half-mile handicap.

There are ten flights of hurdles still to be jumped though and all the big yards are set to be represented here.

This race presents a major headache for punters as only one favourite in the last ten renewals has won and seven of the last ten winners have returned at a starting price of 11/1 or bigger.

The race usually attracts a field of at least twenty runners and has done again but in an interesting statistic, six of the last eleven winners have won on their most recent start.

Willie Mullins is the most successful trainer in the race having landed it four times since the race was established in 2009.

Paul Nicholls has also won the race twice and has fared best of the home based yards.

No horse aged older than seven has won this race since its inception and nine of the last eleven winners had at least been placed on their previous start. 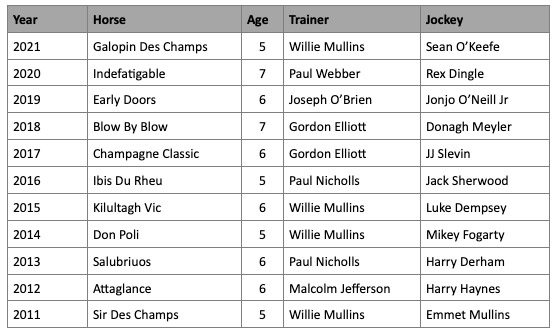 Below are selected runners who hold entries for the Martin Pipe Handicap Hurdle 2022.

Langer Dan put in a good effort off just two pounds lower in this race last year comfortably beating all bar Galopin Des Champs who was evidently very well treated and has advertised the form massively since.

He had won the Imperial Cup just six days earlier.

He is now interesting back here with last month’s reappearance under his belt.

Adamantly Chosen made all in maiden at Thurles and took his form figures to 1221 (debut win came in bumper).

A runner-up on heavy on his penultimate start. He is certainly bred to be suited by this longer distance. He should have plenty more left to offer.

Willie Mullins has such a strong record in this and he closed this meeting with a winner in Galopin Des Champs last season. One to seriously consider.

Hollow Games was a Grade 3 winner at Navan in November, taking his career record to five from five.

He was a highly creditable third in Grade 1 novice hurdles at Naas over this trip and at Leopardstown since over two furlongs further.

He brings a very useful form to what is effectively his handicap debut and may well have more to offer especially in this company.

A first time is tongue-tie applied and that too may improve him.

The Goffer is an Improving novice hurdler who is two from three over this two-and-a-half-mile trip.

He most recently won a Grade 3 race at Thurles in a race that the same yard’s Blow By Blow won in 2018 before following up in this contest.

The form has taken substantial knocks since, so one has to be wary of how good a race it actually was. Others look to hold stronger claims.

Chemical Energy ran in the Champion Bumper last season and ended up finishing in the mid-pack behind the likes of Sir Gerhard and Kilcruit.

He has improved for the switch to hurdles and was second in a Grade 3 race at Navan in November before winning an ordinary Novices’ Hurdle at Fairyhouse later that month.

The form of the race has been franked by the runner up (Lunar Display) since and if lining up here would bid to give Gordon Elliott a third winner inside the last six years.

Banbridge won a two-mile novice hurdle at Navan in January, taking his hurdles record to three wins from five starts. The first two hurdle wins were on soft ground.

He ran better than bare result as he met trouble in running in big-field handicap at Leopardstown the time before.

It is worth noting that he won over an extended two-and-a-half-miles last summer and he’s bred to relish this step back up in distance.

Whilst he is open to further improvement, his yard has been very quiet.

Grand Jury justified favouritism at Punchestown on debut over hurdles.

He was pitched into Grade 1 novice events since and ran well at Naas, where he finished just in front of the re-opposing Hollow Games.

He was then well behind same rival when disappointing at Leopardstown.

A tongue-tie applied, but he needs to seriously improve for it.

The Very Man has one stat on his side, as the last four winners of this race were at the head of the weights (they all carried 11-10 or 11-9).

He was successful at Navan on what was only his third run for this yard over this trip and the form has been boosted by the runner-up since.

One to consider, but again the yard has been particularly quiet of late. 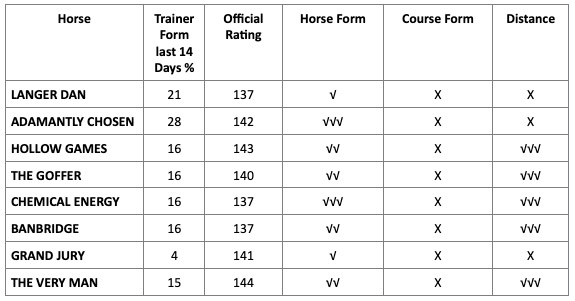 CHEMICAL ENERGY looks to be the one to be on here given that he ticks so many boxes.

Proven at graded level, he has thrived since returning to action this season.

Gordon Elliott knows what type of horse it takes to win this though and given the recent record of the Irish in this, Chemical Energy is the selection.