Tip: Frodon Danger: Does He Know

Despite attracting such large fields, the winner tends to be featured within the top four in the betting.

Golden Chieftain was the biggest priced horse win this in the last decade at odds of 28/1 for Colin Tizzard and Brendan Powell.

The older horses seem to fare better than their younger rivals with eight and nine-year-olds faring particularly well, although ten-year-olds have only taken two of the last twenty renewals (Chief Dan George in 2010 and Joes Edge in 2007) and most horses come home in and around six minutes.

David Pipe and Jonjo O’Neill have fared well in this race in the past having won it three times apiece.

Nicky Henderson and Alan King have won this handicap twice. In what is quite an unbelievable stat only two Irish trained horses have won this race since the turn of the millennium (Youlneverwalkalone 2003 and Dun Doire in 2006).

In comparison, Nigel Twiston-Davies, Venetia Williams, Paul Nicholls, Philip Hobbs and Sue Smith have all tried to win this on multiple occasions and failed.

Tom Scudamore, Richie McLernon and Brendan Powell have all won the race more than once and all three are likely to participate this year once again.

Richard Johnson and Aidan Coleman have never won the race despite having had more than ten attempts each. 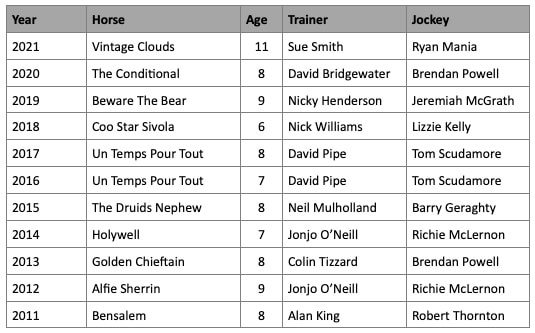 Below are selected runners who hold entries for Ultima Challenge Chase 2022.

Remember to shop around as many bookmakers will offer enhanced place betting on this type of race.

Gordon Elliott certainly thinks this eleven-year-old has been treated kindly by the handicapper and ante-post punters have taken advantage of that.

Into as short as 8/1 in places, it was good to see him roll back the years when he won in decisive fashion at Punchestown last month.

His record at this track though is abominable and he finished 10/23 in a Grade 3 Handicap at the 2020 Festival and prior to that he unseated his rider in the Stayers’ Hurdle back in 2017.

Needs soft or heavy ground to be seen at his very best. There is a reason he has only won one race since 2017.

DOES HE KNOW – KIM BAILEY

Does He Know has been a model of consistency so far this season and made a costly error at this track back in November which saw him lose his unbeaten streak this season.

He was given three months off and bounced back to rude health by demolishing Doyen Breed in a Grade 2 Novice Chase at Ascot just last month.

He remains open to further improvement here and he has some top class form over this track.

This race is usually won by an English horse and if he has a hood applied that will focus his mind on the job in hand.

Noble Yeats was a good sort last year and won his maiden hurdle by a dozen lengths.

He returned from his break and was immediately sent over the larger fences by Emmett Mullins.

He duly obliged on his seasonal reappearance when getting the better of Gabynako in a thrilling bob of the heads at Galway.

Since then he has been a little disappointing, but a few of those runs have come in valuable handicaps.

He showed much more zest when last seen out at Wetherby and he got to within five-and-a-half lengths of Ahoy Senor.

He has had a gruelling year and this might be one step too far and he has no previous experience of this track which is a massive negative.

Flouer has bumped into Galopin Des Champs in two of his most recent starts and was firmly put in his place both times.

He also ran against stablemate Death Duty last time out on heavy ground at Punchestown in a Grand National Trial and was beaten seven lengths into third.

The better the going, the better are this one’s chances as he always seems to be more alert on decent ground.

Jordan Gainford is able to claim three pounds off his partner’s back and they have to be rated as live dangers.

Corach Rambler was moving ominously well having slid through the field on his most recent start at Ascot.

The eight-year-old looked like he really was appreciating the return to three miles having not seen out the extra half-mile at Warwick the time before.

His previous win here back in December bodes well for his chances and provided that last race hasn’t knocked the stuffing out of him, he has to be considered here.

He is still only lightly raced and could well be a cut above the rest of these.

This is a massive drop in grade for the multiple Grade 1 winner. As a result, he is burdened with almost twelve stone against younger types.

His task is not impossible and with six previous course wins and two of them over this trip.

He teams up with regular pilot Bryony Frost and they are likely to go well for a particularly long way.

His last two runs have been concerning though and despite this being a lower level than what he is used to it is still somewhat off-putting.

Fantastikas ran a fair enough race here behind L’Homme Presse in the Paddy Power Novices’ Chase back in January.

He supplemented that performance back in regular company at Lingfield next time out when just getting the better of Queenofhearts a little more than three weeks later.

All of his best runs have come when there has been plenty of rain around and this locally trained runner would have to be high up on any shortlist if the heavens were to open.

He looks to need every inch of this three-mile trip and he has to command respect.

Our Power scrapes in at the foot of the handicap here and was far from disgraced when tried at this trip for the first time at Kempton last month.

He finished a gallant third to Cap Du Nord that day and that would offer some hope to those who have backed him.

What has to be major concern is his record around this track which is zero from four tries. He only makes limited appeal on that basis.

Tip: Frodon Danger: Does He Know

It could be well worth siding with FRODON now that he takes a massive step down in grade. A return to his favourite racecourse could well rejuvenate the ten-year-old.

He does have a massive weight to carry but his jockey will be well aware of that and she won’t ask too much from him too soon.

The Grade 1 winner knows every blade of grass on this track and given the poor record of the Irish in this race, he has to enter calculations.

Does He Know is in great form but his yard is not and that is a major concern.

Tips For The Champion Hurdle 2022 – Has Honeysuckle Got It In The bag...
Scroll to top